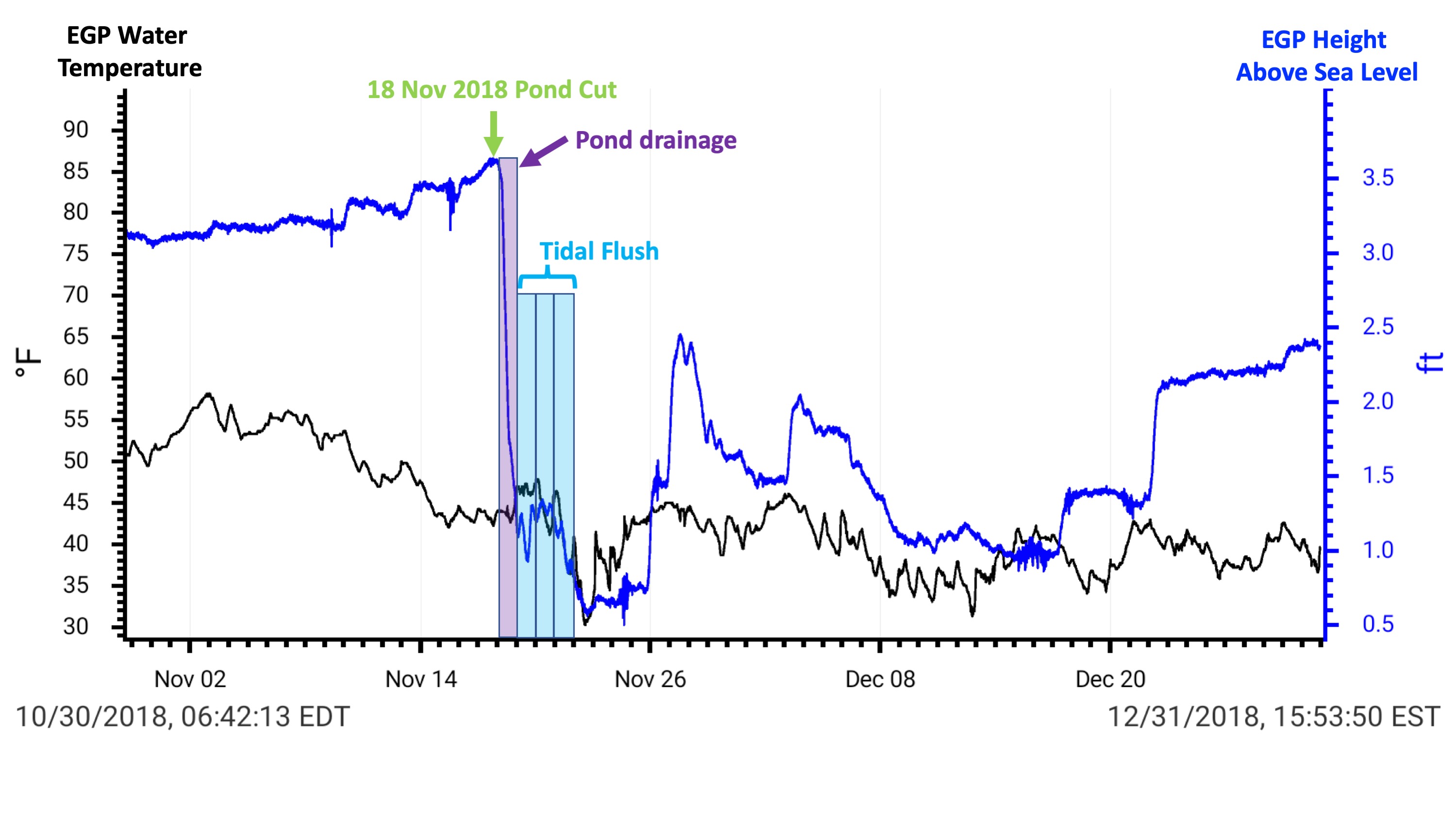 Edgartown Great Pond was included as a study site in a recently-published analysis of tunicate colonization of eelgrass (Zostera marina) from New Jersey to Newfoundland. Tunicates, commonly known as sea squirts, are invertebrates that attach to substrates such as rocks or mooring anchor lines. Tunicates also attach to eelgrass blades, which can be harmful to the plant by reducing photosynthetic productivity and growth. Eelgrass beds play an important role in the ecosystem and sequester carbon dioxide from the atmosphere. Yet, the species is threatened by a number of factors, including tunicates.

This study surveyed 33 sites along the East coast of the U.S., and found that the distribution of tunicate species diversity across the latitudinal gradient was related to water temperature. This is important baseline data, because warming water temperatures will likely cause the distribution of tunicate species to shift. In EGP, the tunicate species found was Molgula manhattensis, which had the highest density in Slough Cove. This work was a collaboration between many institutions, including our colleagues at Woods Hole Oceanographic Institution, Environmental Protection Agency and the Oak Bluffs Shellfish Department.

Please find more details in the publication: Biogeographical patterns of tunicates utilizing eelgrass as substrate in the western North Atlantic between 39° and 47° north latitude (New Jersey to Newfoundland).

Last year marked the first sighting of the clinging jellyfish, Gonionemus vertens, in Edgartown Great Pond.  This small and powerful jellyfish clings to eelgrass blades and its earliest local observation was recorded in the 1800’s in Woods Hole.  The first scientific study about clinging jellyfish in Edgartown Great Pond was published in the spring of 2019 along with our colleagues from the Woods Hole Oceanographic Institution (WHOI) and the Oak Bluffs Shellfish Department.

The discovery of Gonionemus in Edgartown Great Pond not only represents a range expansion, but it is also an extension of the know salinity tolerance of the species.  All of the individuals collected in EGP were male, a very unusual occurrence, and this founding population suggests a recent invasion and clonal reproduction.  Please find full details in the publication entitled: Distribution of the highly toxic clinging jellyfish, Gonionemus sp. around the island of Martha’s Vineyard, Massachusetts, USA.

While we can expect all of the normal spring events like growing eelgrass and hatching animals, it is not yet know whether or not the clinging jellyfish will re-emerge in 2019.  Should they have made it through the winter, we can expect to see them in June. See some beautiful videos and  learn more about the global spread of these jellyfish from our friends at WHOI.

This study would not have been possible without the support of the Edey Foundation and our stellar 2018 interns Spencer Goldsmith and Sam Hartman.

Download the most recent Annual Report for a complete summary of our activities and financial status.