Piping Plovers and Least Terns are federally listed as a Threatened species and are protected by Massachusetts and Federal law. American Oystercatchers are monitored closely as a vulnerable species. Great Pond Foundation has teamed up with BiodiversityWorks to monitor the beach nesting birds of Edgartown Great Pond’s barrier beach. 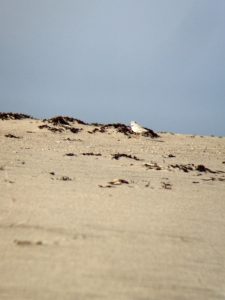 This year, 5 adult pairs of Piping Plovers and 1 pair of American Oystercatcher nested on Edgartown Great Pond’s barrier beach. 3 out of the 6 nests hatched successfully, however there were no fledglings. We are hopeful that next year will have a better turnout since Piping Plovers exhibit high site fidelity meaning that they may return next year with more nesting experience. 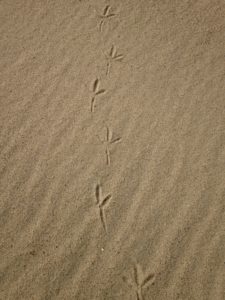 Predators
Predators to watch out for at Edgartown Great Pond are crows, northern harriers, skunks, raccoons, and gulls. These predators are a threat to both eggs and young chicks. If a nest is out in the open and there is an abundance of predators, then it is important to consider predator management or the use of an exclosure. Trash left behind by beachgoers often attracts predators to a beach. 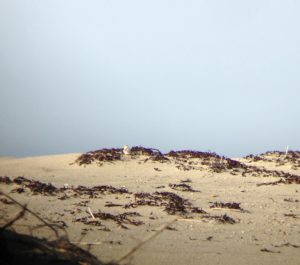 The Piping plover’s diet consists of marine worms, crustaceans, and insects along the pond shore where foraging occurs. Male plovers defend their nesting territory through a series of calls and flight patterns. Nests consist of a shallow scrape in areas of sparse vegetation and rocky sandy and is often decorated with shell fragments. Females can lay anywhere from 1-4 eggs and both parents will incubate for approximately 26 days. Piping Plover chicks hatch with the ability to run and find their own food.  Because of their coloration, the chicks often remain motionless when threatened by a predator relying on their camouflage. It takes roughly 26-35 days for a chick to fledge.

American Oystercatchers feed on bivalves, mollusks, worms, and marine invertebrates that inhabit the intertidal zones. They use their long bills to hammer and pry open shellfish to reach the meat inside. Nests consist of large scrapes and stick fragments much like the nests of Piping Plovers. Females typically lay 1-3 eggs and where both parents incubate for 26 days. Oystercatchers move away from the nest or eggs when predators are present and are typically gone long before a predator even notices them. Adults often hide their chicks in vegetation until they are almost fledged. American Oystercatcher chicks are dependent on their parents for food until they are at least 60 days old.